The government has received a report into Huawei that is likely to change its policy over the Chinese firm’s role in the UK’s telecoms networks.

NCSC is believed to have said it can no longer assure the security of Huawei’s products because of new US sanctions.

The Department for Digital, Culture, Media and Sport has yet to deliver its conclusions to the prime minister, but Boris Johnson said on Monday afternoon that he did not want the country to be «vulnerable to a high-risk state vendor».

Huawei has said it remains «open to discussions».

But one of the company’s spokesmen took a tougher line over the weekend, following newspaper reports that the government might ban the purchase of new Huawei 5G equipment by the end of the year.

«UK policy is being dictated by [the] Trump administration… shouldn’t the US respect a United Kingdom in the post-Brexit era being in a position to chose its own telecommunication strategy?» tweeted Paul Harrison, Huawei’s head of international media, UK.

China’s ambassador to the UK has warned that if the country got rid of Huawei, it would send out a wider message about its openness to foreign investment.

Huawei’s role in the UK seemed to have been settled in January, when the government placed a cap on its market share in mobile and full-fibre fixed-line broadband networks, and excluded its involvement in the most sensitive parts of 5G known as the «core»‘.

However, the US subsequently announced fresh sanctions that forbid the Chinese firm and the third parties that make its chips from using «US technology and software to design and manufacture» its products.

Washington claims Huawei is backed by the Chinese military and poses a national security risk, claims the company denies.

NCSC has examined the impact of the sanctions, including the fact that they effectively prevent the company from being able to use critical software to design and simulate chips before their fabrication, as well as stopping third-party manufacturers from being able to use equipment needed to produce some of Huawei’s most advanced processors.

The risk is that as a consequence Huawei would have to start sourcing chips from elsewhere, which UK security officials might not be able to properly vet.

«Clearly the US sanctions will present challenges and that is what that advice is about,» Mr Dowden told the BBC.

He said a final decision had yet to be taken, but added: «We want to diversify away from these so called high-risk vendors, of which Huawei is is the principal one… we want to be in a position where we don’t have high-risk vendors in our networks at all.»

Mr Dowden said he aimed to tell Parliament of any policy change before MPs rose for the summer recess on 22 July.

It remains unclear how far the government will go.

The Sunday Times reported that BT and Vodafone had asked to be given until 2030 to remove Huawei’s equipment from their existing 5G infrastructure.

But ex-Tory leader Sir Iain Duncan Smith told the BBC: «The government now must act and make sure that Huawei or any other untrusted vendor is never to be in our telecom system.»

And one of his allies, Bob Seely MP, told the Telegraph: «2029 is going to be too long for some colleagues, who want to see Huawei out of the system by the end of this parliament.»

In theory, the Prime Minister could decide to go further, ordering Huawei’s kit to be removed from 3G and 4G networks, and even the tens of thousands of roadside cabinets it is currently sits in providing broadband connectivity.

But experts have warned that the cost of this would run into «billions of pounds» and would cause major delays to the rollout of full-fibre internet.

When asked about this, Mr Johnson said: «We have to come up with the right technological solutions, but also we will have to make sure that we can continue to deliver the broadband that the UK needs.»

A spokesman for the prime minister added that there was «no change to [the] broadband 2025 target».

China’s introduction of a controversial security law giving it new powers over Hong Kong, and the subsequent arrest of some pro-democracy protesters may put the prime minister under further pressure to take a tough stance.

Former Labour business minister Peter Mandelson said the forthcoming US sanctions – which are due to come into effect in September – provided «a cover» for the UK to change its position.

«President Trump has undoubtedly succeeded in overturning the government’s original decision about Huawei equipment in Britain’s 5G network,» he added.

«This is fundamentally not a question of security. It’s a commercial war between the US and China.

«President Trump said he wanted to demolish Huawei, and he’s doing so through very draconian sanctions.»

But Nigel Inkster, the former director of operations at MI6, told the BBC that the UK needed to avoid becoming «collateral damage» of a clash between the two superpowers.

«It’s going to be very important for the UK to manoeuvre adroitly to ensure that we don’t get forced into making a binary choice in this area, in ways that could be very detrimental to our long-term interest,» he said.

When questioned about the issue, China’s ambassador to the UK said the wider Chinese business community was watching to see how the UK handled the case.

«But if you want to make China a hostile country, you will have to bear the consequences.»

On Thursday, MPs will discuss the issue further at the House of Commons science and technology committee when it questions Huawei, Vodafone and BT about the implications of a potential ban. 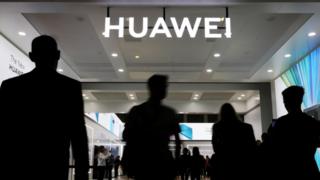