The government has been criticised for handing out more than £16bn in cheap loans to well-known firms such as John Lewis and Tottenham Hotspur.

Of that, £1bn was lent to a German chemicals giant, while the UK’s biggest airlines have borrowed almost £2bn.

But senior Labour MP Margaret Hodge has called the loans «a flagrant abuse of public money».

In response, the Treasury said the loan scheme was helping to protect hundreds of thousands of jobs.

The Bank of England’s Corporate Covid Financing Facility (CCFF) was set up to help large firms with a big impact on the UK economy through the crisis. It is one of a number of schemes designed to lend money to businesses affected by the pandemic.

The list of 53 firms that have used the facility includes some household names such as M&S, Asos and Nissan.

Airlines Ryanair and EasyJet each borrowed £600m, while British Airways owner IAG and Wizz Air were lent £300m each.

That has prompted complaints from environmental campaigners who say the money should have been lent with conditions attached.

«Airlines have been given exactly what the chancellor, the prime minister, economists and the public said they should not be given – billions in cheap and easy loans to keep them polluting, without any commitments to reduce their emissions or even keep their workers on the payroll,» said Fiona Nicholls from Greenpeace.

The biggest single loan was handed to German company BASF, which is the world’s largest chemicals producer, although it only employs around 850 people in the UK.

«We should see a lot more public benefit from all this public money,» Ms Nicholls said.

«But we also do need an airline industry as we come out of this, so that people can move about.»

‘Taken for a ride’

Dame Margaret said supporting businesses to protect jobs was the right thing to do.

«But I have huge doubts on whether splashing billions of pounds of government finance on large corporations represents good value for money for hard-working taxpayers,» she said.

She said a lot of companies that had accessed the scheme were based abroad or owned by billionaires. Others, she said, were «shockingly» due to hand out dividends this year.

She called the scheme «a blatant misuse of the public purse», adding: «The taxpayer has been taken for a ride.»

A Treasury spokesman said: «The Corporate Covid Financing Facility is a key part of [coronavirus] support, directly protecting hundreds of thousands of jobs, supporting some of our biggest companies’ cashflows and enabling then to support their suppliers.» 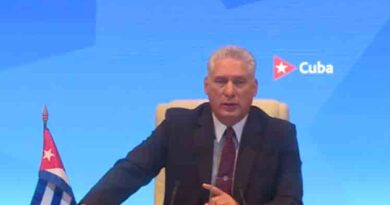