The vast majority of emissions cuts from electric cars will be wiped out by new road-building, a report says.

The government says vehicle emissions per mile will fall as zero-emissions cars take over Britain’s roads.

But the report says the 80% of the CO2 savings from clean cars will be negated by the £27bn planned roads programme.

It adds that if ministers want a “green recovery” the cash would be better spent on public transport, walking, cycling, and remote-working hubs.

And they point out that the electric cars will continue to increase local air pollution through particles eroding from brakes and tyres.

The calculations have been made by an environmental consultancy, Transport for Quality of Life, using data collected by Highways England.

The paper estimates that a third of the predicted increase in emissions would come from construction – including energy for making steel, concrete and asphalt.

A third would be created by increased vehicle speeds on faster roads.

And a further third would be caused by extra traffic generated by new roads stimulating more car-dependent housing, retail parks and business parks.

The report says even with the government’s most optimistic estimate of the adoption rate for electric vehicles, emissions from trunk roads and motorways in England are not on track to meet “net zero“ by 2050.

A government spokesperson told BBC News the report is based on old data.

“This assessment is wholly incorrect and doesn’t take into account the benefits from the massive surge in electric vehicles,» he said.

«The Road Investment Strategy is consistent with our ambition to improve air quality and decarbonise transport.»

The report’s lead author, Lynn Sloman, said the electric car revolution would happen too slowly for transport to achieve the UK’s carbon-cutting goals.

“If we are to meet the legally-binding carbon budgets, we need to make big cuts in carbon emissions over the next decade,» she said.

«That will require faster adoption of electric cars – but it will also require us to reduce vehicle mileage by existing cars.

The government accepts that overall mileage should be cut.

But it says the impact of the new roads programme on emissions will be a fraction of the report’s predicted figure.

The AA president, Edmund King, supports some road-building. He told BBC News said: “We believe post-lockdown that more people will continue to work from home, drive less and cycle and walk more.

“But even with investment in broadband and active travel, we will still need road investment – particularly to overcome the congestion hotspots to help get our goods to market.”

Ms Sloman, who works regularly as a consultant for the Department for Transport, responded: “More roads just mean more cars. Decades of road investment have not solved congestion.

“Sustained lobbying for more money for roads, leaving less for public transport, cycling and walking, is one of the reasons we now face a climate emergency. We can’t afford any more to indulge this Toad of Toad Hall model of mindless road-building.”

She also says the government can’t ignore the continuing air pollution that will be caused by particles from the brakes and tyres of electric cars.

This pollution could actually be increased if the fashion for heavy battery-powered SUVs continues.

Ms Sloman said: «This is an institutional problem. There are people in the Department for Transport and Highways England who have built their careers on big road building budgets, and they won’t easily give them up.

“But there are also some officials – and perhaps some politicians – who are starting to recognise that the climate emergency means we need a radically different approach to transport.»

The Department for Transport is currently consulting on a decarbonisation strategy, and will publish its plan later in the year.

‘Our gyms abroad are helping us through lockdown’ 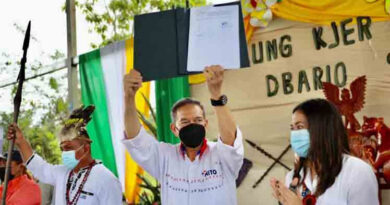