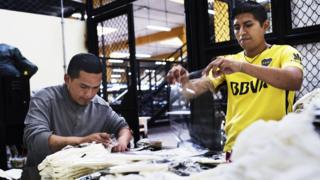 The agile hands of men who once made a living as pickpockets and robbers have been given another task in Peru’s largest prison. By cutting, sewing and printing clothes they are able to earn money to send to their families on the outside.

Buzzing sewing machines add to the cacophony of sound at San Pedro de Lurigancho men’s prison in central Lima, the capital of Peru.

Around 30 prisoners are in the workshop, making printed t-shirts and other items of clothing for Peruvian fashion brand Pieta.

The noise makes it impossible for the men to talk to each other without shouting. But they are used to the commotion – the prison is home to 10,000 inmates, even though it was only built for 2,000.

Carlos Arcel, 51, is fashioning sweaters from llama wool. With a pile of the black fabric next to him, he works the sewing machine so quickly that the fringes flutter.

«Working for Thomas has made my heart happy,» he says.

The Thomas in question is Frenchman Thomas Jacob, the owner and founder of Pieta.

A former fabric buyer for French fashion house Chanel, he was inspired to set up the Lima-based business back in 2012, following a visit to San Pedro prison. Thomas, who had been living and working in Peru, went with a friend who was teaching some of the prisoners French.

«Some of the interns told me that they knew how to sew, weave and print, but that they didn’t get to use that knowledge,» says Mr Jacob, 33.

«I realised that there was potential to do something for these people, so I decided to start a clothing brand that would be designed, produced and distributed from prison.»

Today the business has around 50 workers across three Peruvian jails, two male and one female, and makes around 1,000 garments a week. A not-for-profit enterprise, the prisoners earn a commission from the sale of each item they make.

Those that get involved need not have any prior experience of clothing manufacturing, and the crimes for which they are serving their sentences range from petty theft to murder.

Pieta now has three stores in Lima, but most of the clothes – which since the coronavirus outbreak include face masks – are sold via its website. It gets most of its international orders from Australia, the US, and other countries in South America.

The prisons are paid equivalent to the Peruvian minimum wage, but Mr Jacob says that he did not base production in the jails to save money.

«The textile industry in Peru is quite well developed, and because we have a fairly large production, we could reduce our costs significantly if we moved outside the prison,» he says.

«But I don’t want to exploit people and make them feel bad. We are a social project, and it would not serve any purpose if we moved the production.»

Working for Pieta also helps prisoners to reduce their sentences, as it enables them to afford to sign up to academic courses. Doing this study results in their prison time being cut by authorities.

«My sentence is five years long, but you can get out faster if you study for at least two years,» says Daniel Rojas Palacios, 25.

He has been working for Pieta for a few months. In addition to providing for his young daughter on the outside, he is using the money to pay to study textile design.

«The course costs, and that’s why I have to work a lot,» he adds.

Peru is not the only country that lets fashion companies locate their textile production inside prison. In Finland, a business called Papillon has been doing the same as Pieta since 2009.

«In addition to providing reasonable work and rehabilitation projects in prisons, with the aim of activating inmates, we aim to make our products in the most sustainable way possible,» says Papillon chief executive Teemu Ruotsalainen.

Another fashion label that makes its clothes behind bars is Danish brand Carcel, which produces clothes in two women’s prisons, one in Thailand, and the other in Peru.

Founder Veronica D’Souza says she was inspired after visiting a women’s jail in Kenya. «The guards at the prison said that the worst thing for the women is to do nothing. It causes depression.»

Florian Irminger, chief executive of campaigning group Penal Reform International, says his organisation is in favour of prisoners being able to work for companies, provided that they are not being exploited.

«We believe in rehabilitation efforts of prisoners, including through prison labour that is significant, and provided that it is based on a freely agreed upon contract by the prisoner,» he says.

«Too often, prison labour, however, is seen as cheap labour. Labour in prison should be an opportunity for the prisoner to contribute to the development of the community.

«Work should allow to improve the conditions in which prisoners live, especially in contexts of low and middle-income countries. Finally, work in prison must have a long-term contribution to the prisoner’s life, for example through training and work certificates.»

Back in Peru, Mr Jacob says the prisons involved in Pieta are «happy to have something to do».

The company takes its name from Michelangelo’s sculpture of Mary holding a lifeless Jesus after he being taken down from the cross. Mr Jacob says he chose the name, which in English means «pity» or «compassion», as the sculpture represents resurrection.

«The motivation of the prisoners is to make money, and learn a profession, and with the money they can shorten their prison time,» he says. «When they come out we have hopefully also changed their attitude.» 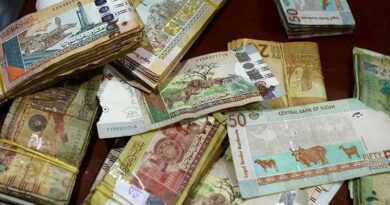