The BBC’s weekly The Boss series profiles different business leaders from around the world. This week we speak to shoe designer Luis Onofre.

Luis Onofre openly admits that his first foray into luxury shoe design could have been his last.

The Portuguese designer launched his first namesake collection in 1993, shortly after taking over his family’s shoe factory.

His father had warned him it wouldn’t sell, and his dad was proved correct. Consumers weren’t interested, and the shoes bombed.

«My lack of market knowledge was to blame,» says the 49-year-old. «It was heartbreaking, a big lesson for me. It was very humbling.»

He has also become a symbol of a recent renaissance in Portuguese shoemaking, helping to put the country firmly back on the haute couture map.

Luis, who was born in Oliveira de Azemeis near Porto, in northern Portugal, grew up around shoes. His grandfather opened a footwear factory in the town in 1938, and the business has been been run by the family ever since.

By the late 1980s, Luis’s father was running the business, which was producing high-end shoes for French brands such as Cacharel and Galleries Lafayette.

But when he asked Luis to join the company, the younger Onofre was reluctant, having set his heart on studying interior design.

«I remember seeing the stresses my parents brought home and thinking, ‘I want to run away from that,'» Luis recalls.

He changed his mind, however, and took a degree in shoe design, before becoming managing director of the company in 1993.

Keen to shake things up, he got the factory to start producing its own designs, not just those of other people. And the pain of seeing his first collection flop only made him more determined to reach his goal.

«I knew I wanted to do my own brand, but after my first attempt went wrong I decided to gain experience and resilience in the area. This sector is ever-changing, fashion changes, new technologies change all the time.»

For the next six years he continued to make shoes for other brands, while honing his design ideas on the side.

Finally his moment came in 1999 when he launched a 50-piece collection at Momad, a major shoe trade fair in Spain. Interest in the brand grew following big investments in marketing, and sales picked up.

His designs have been described as «sexy» and «decadent», and often incorporate elements such as Swarovski crystals or vertiginously high heels.

Now based in Porto, the business turned over €8m last year, and employs 60 people across its commercial operations, factory and flagship stores. It also continues to make footwear for other brands such as Jimmy Choo and H&M.

Despite his success, Luis has had to overcome other setbacks as a businessman, including an industry downturn in the 1990s.

Portugal’s shoe-making sector is centuries old, and considered on a par with Italy’s and Spain’s, despite being less well known. But in the late 1980s it was hit hard after Portugal joined the European Economic Community – the precursor to the European Union – in 1986, opening up the economy to foreign competition.

The country’s footwear industry wasn’t ready for the change, and many factories had to close over the next decade. «In the early 1990s, we lost almost all of the international clients we had,» Luis recalls.

Portugal’s reputation for shoe making fell into decline, but Luis and other forward-thinking designers were determined to save it.

«We still had a generation of factory owners that did not understand contemporary fashion, or what was being sold internationally,» he says.

Over the past 20 years, however, he says a new wave of «open-minded» designers have brought fresh ideas to the table and turned things around.

Portugal has regained its reputation for high-end design, factories have been retooled, and thousands of new jobs have been created. It’s helped the country become a key player in the global shoe market, with exports totalling €1.8bn in 2019, up from €1.3bn in 2010.

Paulo Goncalves, a spokesman for the Portuguese Footwear, Components and Leather Goods Manufacturers’ Association, describes Luis as part of a «fresh generation of designers» that brought about change.

«Luis brought a new discourse to the shoe industry, putting talent and creativity at the forefront of an internationalisation strategy,» he says.

Luis’s business still faces challenges, though. Shoemakers across Europe were already struggling with weaker consumer demand, and rising competition from China, when the coronavirus pandemic hit. Now the global luxury goods market is in a deep freeze.

To help out during the global health crisis, Luis paused shoe production at his factory last month to instead make thousands of face masks that were donated to Portuguese citizens.

Shoe manufacturing is now up and running again, and Luis is focusing on increasing online sales as physical stores around the world remain closed. He is also betting on a rebound in Asian markets that are further ahead in lifting Covid-19 restrictions. 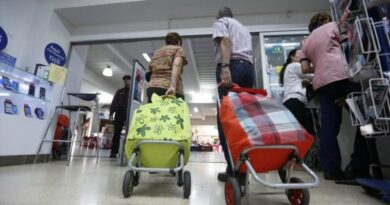