As stores across England selling non-essential goods opened their doors for the first time since the lockdown began, shoppers arrived early to centre:mk in Milton Keynes. Some were picking up goods they had been waiting months to buy, such as baby clothes and home furnishings. Others were here for the sales. These shoppers told us what they bought – and why.

«We bought lots of handbags for my wife, because she loves to buy bags from TK Maxx,» says Paul Sabato, 56.

«We came today because it was the first day. After three months being closed – we knew there would be good sales and there are.»

And Mr Sabato and his wife Jennifer Sabato, 44, have plans to return.

«We also bought some shoes and sunglasses. We spent £570 but this would be worth more than £1,000 normally. We’re going to drop these bags at home then come back and see what sales there are at Zara.»

«We came to buy my daughter some new clothes for work because she starts a new job on Wednesday in the H&M warehouse,» says Arlene Dela Pena, 53, out shopping with Jessica, 20.

«I’m not worried about the virus because I work in a hospital and as long as I have my mask and sanitise my hands and keep distant, then I think it will be safe.»

«We’re here to buy clothes. There are some great bargains,» says Sophie Quantick, 27.

«We wanted to put on makeup and be normal and have a normal shopping experience, even though we have been buying online during the lockdown,» says Bryony Martin, 29. «We have a rollercoaster mindset – what’s the best shop? Go there first.»

«We wanted to buy home stuff like these cushions,» says Ahmed Khan, 33, accompanied by wife Zainab, 28, and baby Mirha.

«We moved into our new home in January, then we went to Pakistan for my brother’s wedding and when we came back in April all the shops were shut.

«We came today because it’s the first day the shops are open. We were expecting sales and there have been. We could have bought online but it’s not the same experience.»

Summer clothes for the children

«We came to buy summer clothes for the children. We went to Primark first but the queue was never ending so we went to H&M,» says Erika Stara, 41, standing alongside her children Rebecca and Marco.

«I wanted to come today and get out and see people, and have some retail therapy.»

«The queue and the social distancing mean it feels different here,» adds Rebecca, 12.

«I bought nightwear and baby clothes because Primark was open. I’m pregnant and I’ve been waiting to get some baby stuff,» says Shantel Brown, 35.

«Everyone keeps their distance. They’ve got sanitiser at the entrance. As long as we’ve got our masks on, we’re fine.»

«I bought tops, shorts and summer clothes. I came because mum forced me,» adds her daughter Tee, 16.

«The strap on my favourite watch broke and I brought it in to the watchmaker’s the day before lockdown. They said come back tomorrow but it was closed.

«So I’ve been sulking. But now my favourite watch is back. I’ve had it 10 years.»

«I bought a jumpsuit because Primark was open and the weather’s getting better again,» says Katie Kirby, 18.

«I did go just to get some essentials like pants and socks, but I when I saw the jumpsuit I had to treat myself because the shops haven’t been open for so long.»

«We do keep out distance in the store. We thought it would be a different shopping experience but once we were in there it was just the same.»

Zac Hopkins, 21, adds: «I bought a skipping rope so I can do some exercise at home. You can’t go to the gym and they’re sold out in lots of shops.»

«I came to Hugo Boss because I wanted to buy some tracksuits for my two brothers and the shops have been closed for three months,» says Tom Hunjan, 34.

«I bought myself one too. They’re similar to what I’m wearing, but in white. The shop didn’t have them in though so they’re ordering them for me and I’ll come back in a few days. Why do I like Hugo Boss so much? It’s probably just marketing.

«I also needed some new boxer shorts because yesterday I noticed an inconveniently placed hole.»

All photographs by Phil Coomes with reporting by Vivienne Nunis. 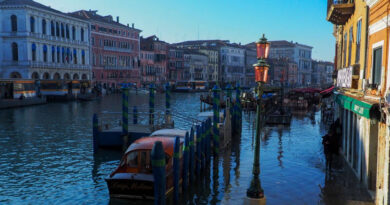